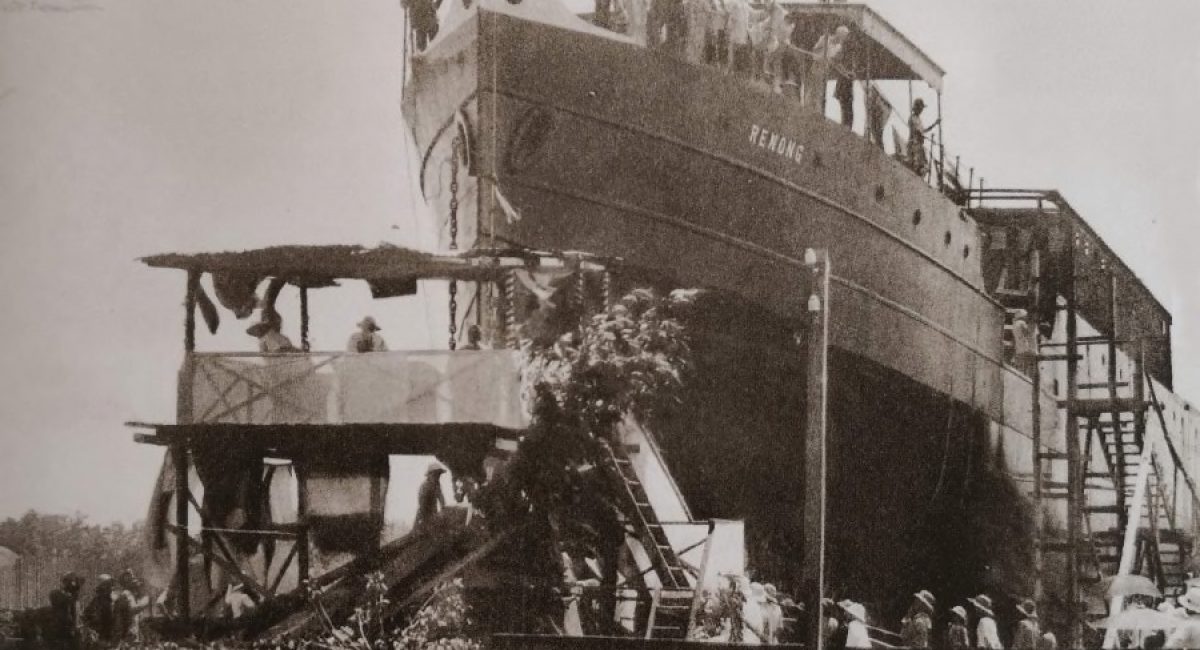 PULAU Talang Talang sedia untuk berlepas (Pulau Talang Talang is ready to depart),” the voice booms over the public announcement system. This is quickly followed by two short blasts of the ship’s horn. Almost immediately, the entire vessel starts to shudder as its powerful engines below deck effortlessly nudge the submerged propellers to life.

Fortunate to get a choice position right next to the metal railing at the upper deck bow, I join the dozens of excited holiday makers and regular commuters in enjoying the scenic landscape that lay in front of us as the ferry slowly glides towards Pengkalan Raja Tun Uda, our disembarkation point on Penang Island.

Apart from enjoying the cool and invigorating sea breeze blowing in our faces, quite a number of my fellow passengers also start taking selfies and wefies with the imposing city skyline forming an irresistible backdrop. At the same time, the smell of freshly baked bread wafting in the air successfully attracts quite a number of hungry passengers to the snack shop just a few steps away from me.

BIRTH OF THE FERRY SERVICE

Everyone on board seems to be having a whale of a time as there’s practically nothing to dislike about this iconic ferry service that first started to take root in its most basic form sometime between 1893 and 1894. The inaugural regular service was initiated by a local entrepreneur, Quah Beng Kee who, together with his four brothers, worked under the collective name, Beng Brothers.

The siblings descended from a well-established Straits Chinese family headed by their China-born father, Quah Joo Moey who immigrated to Penang in the middle of the 19th century. Beng Kee, born in 1872, was educated in Penang Free School and Roberts’ College in Calcutta, India. He married the daughter of Chew Choo Im, the Chinese Kapitan of Deli in Dutch-ruled Sumatra and had five sons and two daughters.

The Beng Brothers’ service operated between Kedah Pier on the island and Bagan Tuan Kecil Pier in Butterworth. Apart from this main route, they also provided transportation services to other nearby areas like Teluk Ayer Tawar, Bagan Ajam, Bagan Luar, Simpang Empat, Bukit Tambun and Kuala Kurau. As motorised vehicles were yet to make their appearance at that time, the fleet only consisted of three large steamers and seven smaller steam launches.

A passenger steamer calling at the Prai Harbour in the 1920s.

A few years later, in 1897, Beng Kee bought out his siblings’ shares in Beng Brothers and began operating the ferry service under his own company, Guan Lee Hin Steamship Company. When his business prospered in tandem with growing passenger and cargo demand, Beng Kee made the decision to convert his concern into a limited company and named it the Eastern Shipping Company Limited.

Besides maintaining its lucrative local ferry service, the Eastern Shipping Company Limited extended its activities by running ships regularly between Penang and ports in other parts of Malaya, Sumatra, Siam (today Thailand) and Burma (now Myanmar).

While keeping a close watch on his expanding shipping venture, Beng Kee also made his fortune by exporting copra from his Penang estates in Glugor and Sungai Nibong. He also dabbled in iron works and owned the Penang Foundry.

The onset of the First World War in 1914 witnessed the Straits Settlements Government requisitioning all local steamers including those belonging to the Eastern Shipping Company Limited. Thanks to the limited effects of the war on Malaya, the authorities released the vessels back to their owners by the end of that same year.

It was business as usual for Beng Kee until 1922 when he accepted a lucrative offer from Singapore’s Straits Steamship Company Limited to take over the ferry service between Kedah Pier and Bagan Tuan Kecil Pier. The new owners’ tenure, however, proved to be short-lived as the venture changed hands once again when the Penang Harbour Board gained control on Dec 1, 1924.

View of the Church Street Ghaut Pier in the 1930s.

At that time, the Penang Harbour Board was aware of the exponential growth of cars in Malaya and it was just a matter of time before a service to transport vehicle across the Penang Straits was needed. It conducted a study of the harbour and found that the water depth during low tide at the Bagan Tuan Kecil Pier wasn’t sufficient for the ferries transporting motor vehicles to operate efficiently and safely.

This revelation resulted in the construction of the Church Street Ghaut Pier on the island and Mitchell Pier on the other side. By early 1925, the transportation of cars using decked-in lighters towed by launches were initiated. The trial service was so successful that a steam ferry vessel, aptly named Seberang, built by the Singapore Harbour Board was put into service late that same year to transport both motor cars as well as passengers.

By the beginning of 1928, the number of passengers and vehicles using the ferry service had increased to an extent that vessels with higher carrying capacity became a necessity. An order for two larger steam vessels were subsequently placed with the Singapore Harbour Board.

Contracts for extension work on both piers were also awarded and the work was completed before the new ferries, Tanjong and Kulim, came into service in early 1929. Together with Seberang, the fleet provided uninterrupted half hourly services during daylight hours.

The number of passengers and vehicles using the ferry service continued to increase annually in the first half of the 1930s. By 1937, it became evident that the older Seberang could no longer accommodate the burgeoning vehicular traffic. Seberang was sold off after the Singapore Harbour Board delivered a new vessel named Bagan in 1938.

The three vessels continued to serve the company well and contributed enormously towards Penang’s economic growth. Things, however, began to take a turn for the worse when the winds of war began blowing towards Malaya in December 1941.

An aerial view of the Church Street Ghaut Pier in the 1930s.

Just as the Japanese Imperial Army was making its way across neighbouring Kedah, a strategic decision was made to scuttle Kulim within the boundaries of Penang Harbour while Tanjong, whose engines were already damaged, was sunk by gunfire in the same area. The sinking of both vessels was necessary to prevent them from falling into the hands of the advancing enemy.

Only the relatively new Bagan was spared a watery grave. The British War Office used it to transport evacuees to Singapore, and from there on to Sumatra. Unfortunately, Bagan was captured during the final leg of its journey and was used by the Japanese to support their war effort in the Dutch East Indies (now Indonesia).

These unlucky string of events left Penang without any proper ferry services during the Second World War. In order to maintain a connection between the island and the mainland, the Japanese authorities operated an irregular service using a wooden motorship for passengers and decked-in lighters towed by launches for vehicles.

“Look! There’s something in the water!” a middle-aged gentleman near me suddenly hollers while excitedly gesturing towards the water surface. I crane my neck to have a closer look, wishing for the most remote possibility that he’d discovered the long lost wreckage of Kulim and Tanjong. Alas, the mysterious object turns out to be a common jellyfish swimming slightly below the water surface.

Returning my sights to the distant horizon, I’m in time to see another ferry glide past in the opposite direction. The regular service that we enjoy today is indeed a far cry from the haphazard ferry schedule experienced soon after liberation in September 1945. During that time, the returning British forces tried their best to reinstate the popular ferry services by reassigning four Z-type tank landing crafts for cross-strait transportation.

The situation improved further after the Penang Harbour Board was reconstituted in April 1946. Bagan, which was recaptured by the Allied forces during the closing days of the war, returned to Penang where it was quickly put back into service.

To improve service further, two of the military landing crafts were given simple modifications at the Bagan Dalam slipway. Renamed Senangin and Lidah, these two vessels teamed up with Bagan to meet the essential needs of passenger transport.

The remaining two tank landing crafts, however, underwent extensive reconstruction at the Bagan Dalam slipway. They were each given an entirely new passenger deck that boasted of greater standards of convenience and comfort. Called Talang and Tenggiri, the two vessels formed part of the post-war fleet that managed to keep up with the growing cross-strait traffic until the mid-1950s.

Beng Kee and his siblings were responsible for the first ferry service in Malaya.

The number of vehicles carried by the ferry service in 1946 was nearly 247,000 but a decade later, the number almost tripled to 711,000. Keen to maintain this phenomenal growth momentum, the Penang Harbour Board hired consulting engineers, Bruce White, Wolfe Barry & Partners, London in 1953 to examine the possibility of increasing capacity as well as plan a completely new set up to replace the existing ferry service once it reached point of saturation.

The study revealed that the existing fleet was outdated and had to make way for a new generation of ferries endowed with greater power, capacity and manoeuvrability while equipped with separate passenger and vehicle decks. The consultants also recommended building new terminals, each with double berths, on both sides of the Penang Strait so that service frequency could be increased beyond 15 minutes.

Accepting the recommendations, the Penang Harbour Board put in place plans in early 1955 to help achieve its ultimate service frequency of five minutes. To make this feat a reality, contracts for new double ended ferries with end-loading capabilities for faster vehicular embarkation and disembarkation times were awarded. The one for a single prototype was awarded to the Singapore Harbour Board while Cheoy Lee Shipyard in Hong Kong received an order for four vessels.

After simple modifications, one of the military landing crafts was launched from the Bagan Dalam slipway in 1946.

The prototype, named Penang, was delivered in May 1957. Apart from its many revolutionary new features, it retained the old styled side-loading capability so that it could still be used at the existing piers while awaiting the completion of the new ferry terminals.

“Excuse me. Please move aside,” the voice of the attendant jolts me out of my reverie. Looking around, I realise that the ferry has already reached its berth. The attendant swings the railings apart as soon as the hydraulic drawbridge is in place and in that instant, everyone starts to surge forward.

While walking through Pengkalan Raja Tun Uda, I pause momentarily to turn back the hands of time to Sept 24, 1959. On that historic day, this terminal was simultaneously declared open together with Pengkalan Sultan Abdul Halim on the mainland. The opening heralded a new dawn for the ferry service in Penang.

By the 1970s, the ferry service’s exponential growth eventually became its own undoing. Second Prime Minister, Tun Abdul Razak mooted the idea to build a bridge linking the island to the mainland to ease the frequent traffic congestion at the ferry terminals.

The ferry service lost its prominence on Aug 3, 1985 when the Penang Bridge was officially opened by Tun Dr Mahathir Mohamad in his capacity as the fourth Prime Minister of Malaysia at that time.

Even though it’s the slower alternative to reach Penang, many were heartened by Transport Minister Anthony Loke’s recent comment to retain Penang’s iconic ferry services. Loke announced plans to improve services by introducing catamarans and upgrade existing ferry terminals. With these novel ideas in the pipeline, there’s definitely better days ahead for the Penang ferry service.