Interview with an American expat living in Penang 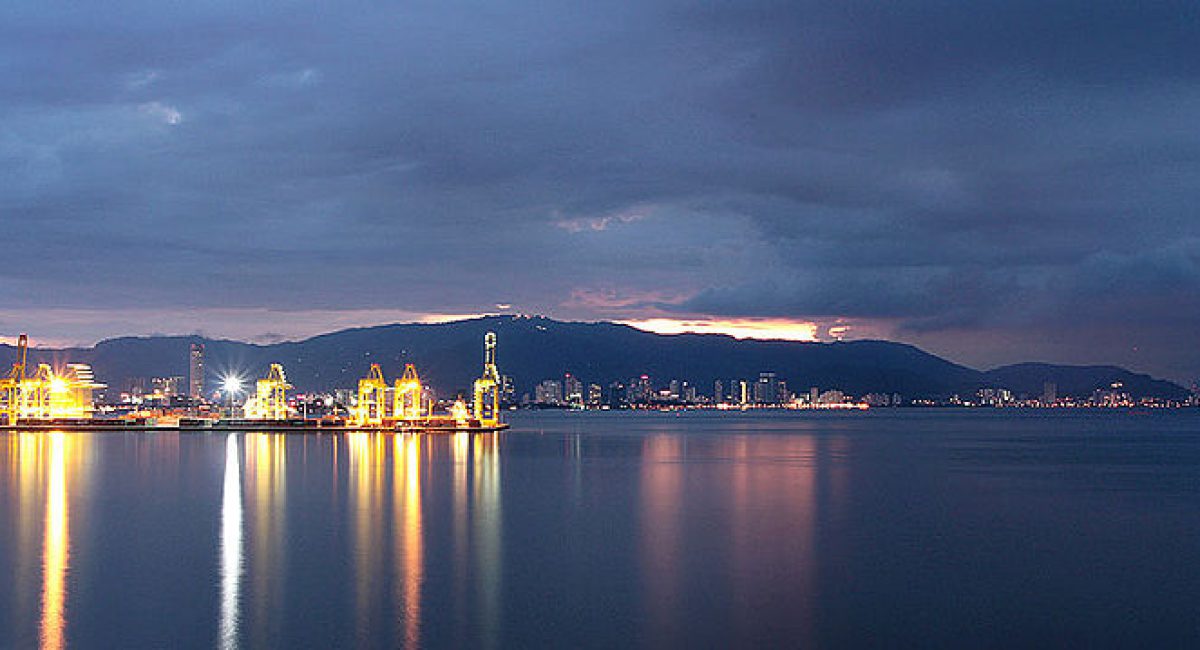 Michele Chan-Thomson is an American expat living in Malaysia. She moved from Austen, Texas, to the island of Penang with her husband and three children when he was transferred with his company. Michele has embraced her expat experience with a positive attitude and has enjoyed exploring her new city and the good quality of life that it has to offer her and her family.

Q: Where are you originally from?
A: I am from Texas in the United States of America.
Q: Where are you living now?
A:  I currently call the island of Penang, Malaysia, my home.
Q: How long have you lived in Malaysia?
A:  We moved in July 2011, so I’ve been here for 16 months.
Q: Did you move with a spouse/children?
A:  My husband and three kids made the big move overseas, too.
Q: Why did you move; what do you do?
A:  My husband’s company transferred us from Texas to their Malaysia branch. Since I am here on a Dependents Visa, I am prohibited from working. I’ve been a stay-at-home mother since my oldest child was born, so I joke that I brought my job along with me. While the kids are at school, I am a lady of leisure and explore the city.

Q: What do you enjoy most about Penang, how’s the quality of life?
A:  Penang is exotic enough to be exciting but not so exotic that I had trouble adjusting to life here. As a former British colony, many locals speak English in addition to their native tongue, so language has not been a problem. I absolutely love the centuries-old mix of British, Malay, Chinese and Indian cultures. The historic part of the city is a UNESCO World Heritage site, and it’s a delight to explore. The food is quite tasty, too. We’ve done so much travelling since we arrived in Malaysia because of the cheap airfare and close proximity to so many exciting destinations. Although Malaysia is classified as a developing country, the quality of life is quite high for expat Westerners.
Q: Any negatives? What do you miss most about home?
A:  I find the unending heat and humidity difficult to endure. We have air conditioners in most rooms but try to limit using them since electricity is expensive. Plus, I usually spend a lot of time outdoors.  I also miss big grocery stores where goods are consistently stocked. And Target! I miss Target so much, but I will admit that my impulse spending on unnecessary items has greatly decreased since we moved to Malaysia.
Q: Is Penang safe? Are there any areas expats should avoid?
A: I feel safe walking around the busy city streets both day and night, although I do keep a tight hold on my purse to discourage snatch thieves. There aren’t any specific areas that I’ve heard to avoid. Landed property (houses) are sometimes hit by robbers, but reports of violent crime are much lower than what occurs in my mid-sized home city in Texas.
Q: How would you rate the public transport in Penang? What are the different options? Do you need to own a car?
Our family has a car, so I’ve never used public transportation. All the expat families I know have at least one automobile. Some people use motor scooters instead of getting a second car. Penang has a bus system that runs throughout the island which many locals and some expats use. Although it’s difficult to find route information online, the buses are reliable and affordable. Taxis are relatively inexpensive, and you can call to request one at your location if a taxi stand is not nearby.
Q: How would you rate the healthcare in Malaysia?
A:  Most expats go to the private hospitals in Penang, although some use the public ones for basic visits such as vaccinations. My friend who had a baby here said it was actually a better experience in comparison to having her first child in Texas. The healthcare is unbelievably affordable even without insurance. A visit to the paediatrician for strep throat only cost USD25 for the doctor visit plus medicine.

About living in Penang

Q: Which are the best places/suburbs to live in Penang as an expat?
A:  Most expats live on the northern side of Penang island. The high rise residential towers along Gurney Drive and in the Tanjung Tokong, Tanjung Bungah and Batu Ferringhi areas are quite popular. If you are interested in living in landed property (houses, townhouses and duplexes), Jesselton, Pulau Tikus, Straits Quay and Tanjung Bungah Hillside are the places to look at.
Q: How do you rate the standard of housing in Penang?
A:  Expat housing is quite good here. Those who are here on a company package typically have what would be considered luxury housing in their home country. Others have homes comparable to nice middle-class housing in the United States. Most expats have maids who come in a few times a week or even live with them.
Q: What’s the cost of living compared to home? What is cheap or expensive in particular?
A:  The cost of living in Penang is incredibly cheap. That is why so many Westerners decide to retire here. If you eat local food and shop at the wet markets, you can save so much money. At the grocery store, buying local goods instead of the imported ones (for example, Asian-made Cheerios cereal versus the Cheerios from the USA.) is a significant cost savings. Water utility is cheap while electricity is expensive compared to what I paid in Texas. If you insist on eating out at the nice Western restaurants, you will end up spending a lot of money.
Q: What are the locals like; do you mix mainly with other expats?
A:  The locals are quite friendly in Penang. As a city that prides itself on its cultural mix, they welcome foreigners. Most of my friends are other expats from all around the world. I don’t just mix with Americans. The company where my husband works primarily has locals as employees, so he, of course, interacts with locals all the time. My children’s international school is almost 25 percent Malaysian.
Q: Was it easy meeting people and making friends in Penang?
A:  I have found meeting people tremendously easy here. With a large expat population, almost everyone remembers what it was like to be newly arrived and somewhat confused. Other expats are helpful and welcoming. Since many trailing spouses are prohibited from working and have maids to do housework, it seems like much more daytime socializing occurs than when I lived in Texas. There are a few expat associations in Penang, although I have been so busy that I haven’t had time to join them.

About working in Penang

Q: Did you have a problem getting a work visa/permit for Malaysia?
A:  My husband’s company sponsored him for his work visa. I’m on a Dependent Pass and am prohibited from working. My expat friends who are self-employed or work at low paying jobs are unable to get a work visa, so they are here on a three-month tourist visa. When it is about to expire they must exit and re-enter Malaysia.
Q: What’s the economic climate like in Penang, is there plenty of work?
A: Penang is trying to become like California’s Silicon Valley, and companies in the growing Free Industrial Zone bring in many expats. For those who move to Malaysia on their own, it’s my understanding that it’s hard to find a good paying job other than becoming a teacher.
Q: How does the work culture in Malaysia differ from home?
A:  Overall, Malay culture is much more relaxed than American culture, and this extends into the workplace. Malaysia also has many public holidays, so the Malaysian branch of our company has 15 holidays a year. That’s five more days than what the colleagues in the USA have.
Q: Did a relocation company help you with your move?
A:  My husband’s employer hired a relocation company to help us make the move from Texas to Penang. They handled shipping our household goods, arranging our home search, and gave us an orientation tour during both our exploratory visit and after we arrived here.

Q: Did your spouse or partner have problems adjusting to their new home?
A:  My husband jumped right into work and didn’t seem to have any problems adjusting to life here. I was quite worried that I would have a hard time since I wouldn’t have work or school to distract me. Life here has far surpassed my expectations and has been a wonderful experience.
Q: Did your children settle in easily?
A:  My children (ages 6-, 8- and 11-years-old when we moved) also settled in rather easily. We were fortunate to be part of a group of families from the company who were all moving from Austin, Texas, to Penang at the same time. Before we left America, we gathered a few times to get to know each other, so my children already had friends when we arrived. The school has also been proactive about looking out for new kids by having special group sessions with the counsellors. And of course, Skype calls with their grandparents and emailing friends has helped them keep in touch with people back home.
Q: What are the schools like, any particular suggestions?
A:  There are a few international schools in Penang. Dalat International School follows an American Christian curriculum while Uplands, St Christopher’s and Prince of Wales follow a British curriculum. Tenby is an international school that partners with a Malay school. My advice would be to apply as soon as you know you are moving. We ended up delaying our move because one of my children was on the waiting list at our top two choices.

Q: Is there any other advice you would like to offer new expat arrivals?
A:  Figure out what will make life in your new country the most meaningful for you. Then, go ahead and make it happen. I’ve seen so many expats blossom here because the big move has been a catalyst to pursue a dream. Would you like to learn the language or volunteer at an orphanage? Is this your opportunity to take up the challenge of training for a half Ironman triathlon or pursue the yoga training that you’ve always longed for? Maybe you want to immerse yourself in the culture and spend your days exploring your new city. Is this your chance to travel or mentor someone at your company?

Also, go out and meet people, even if you’ve decided you’ve had enough of your crazy, new life and just want to hide at home. In Penang, the expat community is vibrant and welcoming. You’ll surely find someone who can help you figure out the details of daily life such as doctor recommendations or where to find groceries.