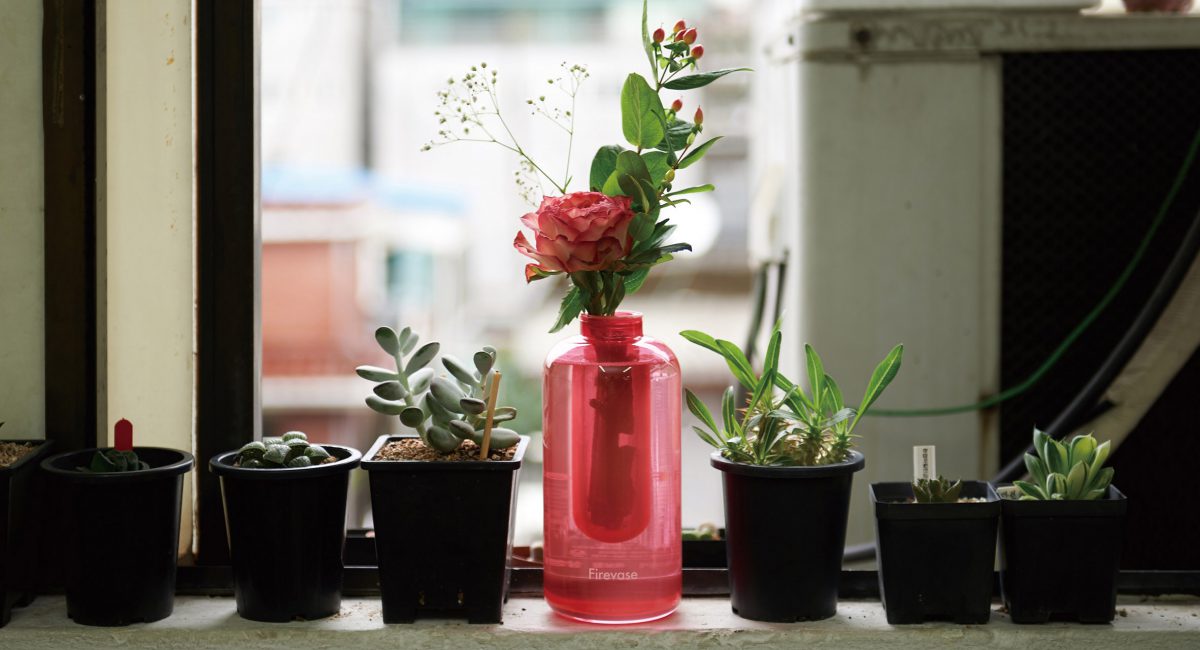 Created by subsidiaries of the Samsung corporation and distributed across South Korea, this unassuming flower vase doubles up as a throwable fire extinguisher.

Appearing to be an ordinary decorative vase made from translucent red glass, the extinguisher is designed to blend into the interior where it can be within easy reach in case of an emergency.

The simple design holds a measure of potassium carbonate in a sealed outer chamber where it appears like water. A separate inner opening in the vase’s centre is designed to hold flowers in the usual way.

When a fire breaks out, the vase can be smashed to release the potassium carbonate that is discreetly stored inside. When the colourless liquid is released it starts a rapid cooling reaction that suppresses oxygen, putting out the fire.

Called the Firevase, the extinguisher was conceived by Cheil Worldwide – a Seoul-based marketing company under the Samsung Group – for Samsung Fire & Marine Insurance. Branded with the company’s logo, the vase forms part of a campaign to raise awareness of the importance of keeping a fire extinguisher to hand.

In South Korea, over 10,000 residential fires occur every year. Despite a new law that required all homes in South Korea to have a fire extinguisher by 2017, the Seoul-based insurance company’s research showed that 58 per cent of homes still didn’t have one.

“When a fire breaks out, the effect one single fire extinguisher can have to help kill the fire in its early stage equals that of a whole fire truck,” it said.

“Even if people do have one, they usually don’t take good care of it. They store it in hard-to-reach places or forget about it completely,” continued the company.

“So with the strategy to equip Koreans that were indifferent to fire safety with fire extinguishers, we created one that was unique so it would increase their desire to have one.”

From September to December 2018, the insurance company distributed over 100,000 Firevases to homes in South Korea. A video featuring a celebrity putting out a fire helped spread the campaign online as well as in theatres, and a print ad was run in 46 different newspapers and magazines.

As a result of the campaign, Samsung Fire & Marine Insurance said that 81 per cent of respondents confirmed that they were now more aware of the importance of having a fire extinguisher at home.

In addition, the number of homes equipped with a fire extinguisher increased by 8 per cent nationwide.

Due to the positive response to the campaign, Samsung Fire & Marine Insurance decided to produce and distribute 200,000 more Firevases, more than doubling the scale of the campaign.

Other fire safety devices featured on Dezeen include a wireless tree alarm by Eli-Gutierrez Studio that can predict the path of a growing fire, and a wallpaper developed by Chinese scientists that can detect fires and set off an alarm if one occurs.