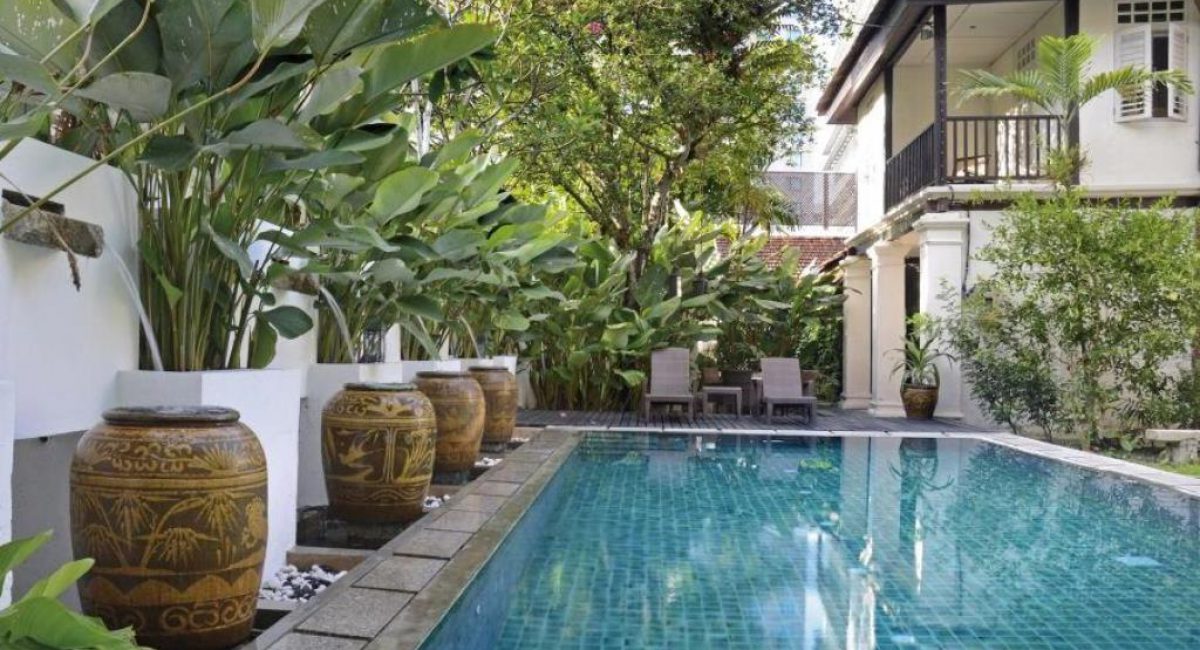 Located on the fringes of the historic city of Georgetown but well within walking distance to it, is Clove Hall. A charming black and white house of the colonial era.  These houses have long been admired for their charm and stylish elegance as well as for their design, which is a reflection of the influence of the mix of cultures.

These houses were later referred to as ‘bungalows’ and are an important part of Penang’s heritage, likewise in Singapore, but with many characteristics originating from India and then exported around the world.

Built on the site of a former colonial plantation and following a sensitive restoration and conversion to a Guesthouse, Clove Hall opened its doors to guests in 2009. Located along Clove Hall Road a quiet residential street, the property is small and intimate. It is owned and managed by Jo and Jim Lim.

It features the characteristic verandahs, high ceilings and tall windows.It has six individual suites each named after an exotic spice. The suites have wooden floors, four poster beds, mosquito nets, ceiling fans and Planter’s chairs on the balconies. However to keep guests plugged-in to the 21st century, Clove Hall provides high tech conveniences such as flat screen HD TV  with cable channels and complimentary Wi-Fi throughout.

The main hall is furnished with colonial and ‘Peranakan’ inspired décor and has black and white floor tiles, inlaid glass windows and etched glass light shades. The garden is tropical with a grove of Clove trees, Helliconias, Frangipanis and Macarthur palms. It offers several private seating areas and nestled into it a jade green tiled swimming pool for guests to unwind and cool off in, after a day of sightseeing in busy Georgetown.

The English breakfast is cooked to order or if local fare is preferred and requested the night before it is sourced from the nearby Kopitiam or Mamak café. A light complimentary afternoon tea is provided between 4 and 5pm. What Clove Hall does not do and with good reason is lunch or dinner. Penang is all about the food!

Clove Hall received an award as Malaysia’s first “boutique homestay” in May 2010 by the Ministry of Tourism.

Clove Hall is regularly featured in local and international newspapers and journals, including the UK’s Sunday Times, Australia’s Sydney Herald and the New York Times. Air Asia’s in-flight magazine recently had a substantial spread on Clove Hall as part of its special feature on George Town’s boutique stays. Over the years, the Star, the Straits Times, The Sun including Focus and the Business Reserve have written about Clove Hall and it features extensively in periodicals such as Time Out, “Impian”, Travel Malaysia.

PrevPreviousThese 7 Destinations Gets Plenty of AirAsia Discounts!
Next9 Ways to Earn Money from Your PropertyNext