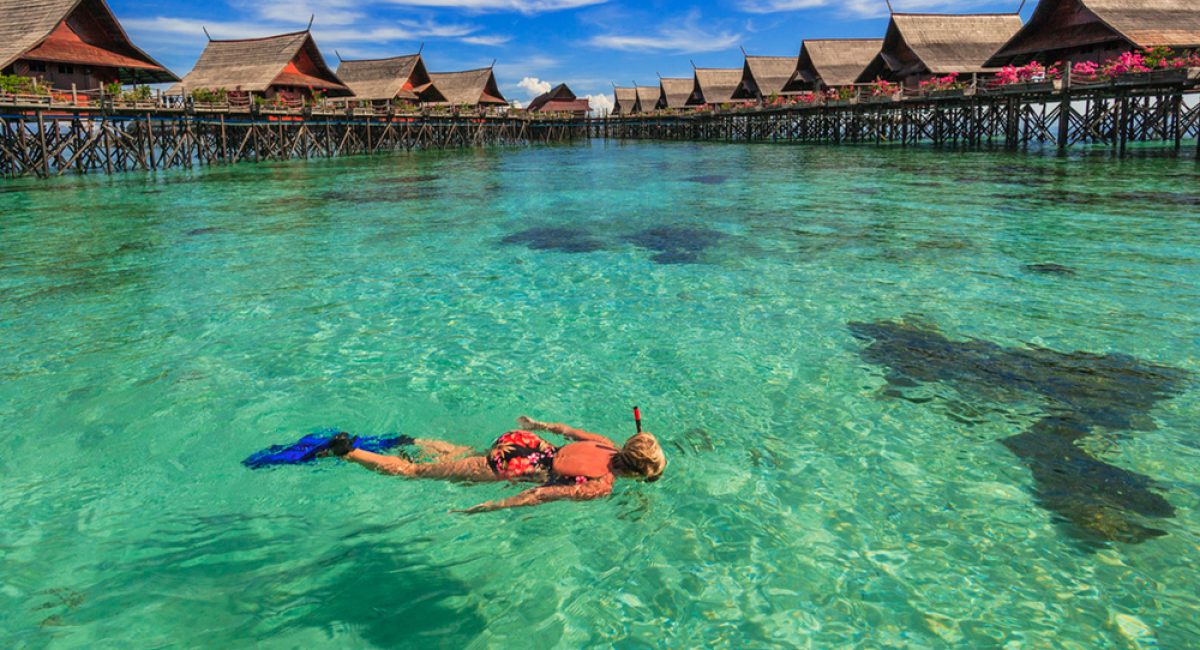 It is always said that the grass is greener at the other side. The same goes to islands. We like to think that islands overseas like Maldives, Mauritius or Bali are better than what we have in Malaysia.

Tell you what, things are not always that way. In fact, Malaysia has several islands which are world renowned for its beauty, in fact so beautiful that they made it into list such as Lonely Planet, Travel & Leisure and even National Geographic Traveller!

We at FlyMe360 decided to pour through these rankings and found 5 beautiful islands in Malaysia that are definitely BEAUTIFUL! Better than Maldives!

About 1-2 hours speedboat ride from Sandakan, Sabah, this island is probably the least known from the list. It is also not very well promoted and featured.

It is a small island, you could probably circle it in 20 minutes walking. The island is also a BIG HIT with divers. Its unique position in the middle of the Sulu Sea, and being smack right in SIMCA (Sugud International Marine Conservation Area) makes it a diver’s paradise. Be prepared to be amazed by its unique species of marine life, coral reefs.

Upon arrival, be prepared to be greeted by throngs of fishes who just swims casually around the jetty. Feel free to play ‘catching game’ with them. Use your eyes to follow their movement – the super-crystal-clear water makes it real fun!

How To Get There: 1-2 hours speed boat ride from Sandakan City.

Sibu Island forms part of the Seribuat chain of islands lying 12 kilometers off the east coast of Johor. The name Pulau Sibu usually refers to the main island in this cluster. Other islands in this cluster include Pulau Sibu Tengah , Pulau Sibu Hujung and Pulau Kukus.

It has an unique hourglass shape, with the length of 6KM and the width of just 1KM. Its long, golden coastline makes is a beautiful place to enjoy a holiday.

Sibu Island is more well known for its ‘Moonrise’ phenomenon – Is is so beautiful there are people who comes to the island just to see it!

How To Get There: Boats leave to Sibu Island from the Tanjung Leman Jetty, about 120KM north from Johor Bahru on the Mersing road.

Pulau Tiga is next on our 5 beautiful islands in Malaysia list.

It made its major ‘debut’ when it was featured on the Borneo leg of the TV series Survivor. It was the setting of Survivor, Borneo the first American season of the show. It was also the setting of the first seasons of the British Survivor shows. Since then the island has since then been called ‘Survivor Island’.

Much like Lankayan Island, Tiga Island is also right on a marine conservation area. Divers who visited Tiga Island will be amazed by its natural beauty and its wide array of marine life.

Aside from being a diver’s paradise, Tiga Island also has its own interesting activity that people rarely associate with islands and beachers – mud bathing! Tiga Island itself was created from a volcanic eruption, and so it has some active mud volcanoes.

How To Get There: Boat to Tiga Island leaves from Kuala Penyu Town, about 140KM drive south from Kota Kinabalu.

This group of nine islands are frequently overshadowed by its much more popular sister, Pangkor up north. On the surface, Sembilan Islands has nothing much to shout about, except one thing – Blue Tears.

Now before you start to think about some dead women murdered in World War 2 that turned into a crying ghost, it refers to a natural phenomenon.  One of the islands – Rumbia Island has this special type of plankton that gives out fluorescent blue light at night. It becomes a beautiful and mesmerising sight at night. Guides do mention that the best time to see the Blue Tears phenomenon is during April.

Watched the video? Now do you know why we think Sembilan Islands should be in the 5 beautiful islands in Malaysia list?

How To Get There: Boat leaves from Bagan Sungai Burung, about 3 hours drive north from Kuala Lumpur.

Terengganu is well known for its beautiful islands – Redang, Lang Tengah, Kapas, Perhentian…the list goes on and on. But have you heard of Gemia? It’s the final island in our 5 beautiful islands in Malaysia list!

Gemia is a private island, about 800 meters from Kapas Island. It is also known as Gem Island, especially among foreigners. Gemis is almost undeveloped, giving it an ‘untouched’ and natural vibe. Its white sands, quietness and calm, deep blue sea are certainly something you would enjoy!

Gemia Island is much more known for its turtles. Do not be surprised to see baby turtles crawling of swimming around the coast! Visitors around the month of May to October has a chance to see these beautiful turtles lay eggs!

How to Get There: Boats to Gemia Island leaves from Marang. Fly to Kuala Lumpur to Kuala Terengganu, and drive south about 45 minutes to reach the town. You could also drive 4 hours northeast from Kuala Lumpur.