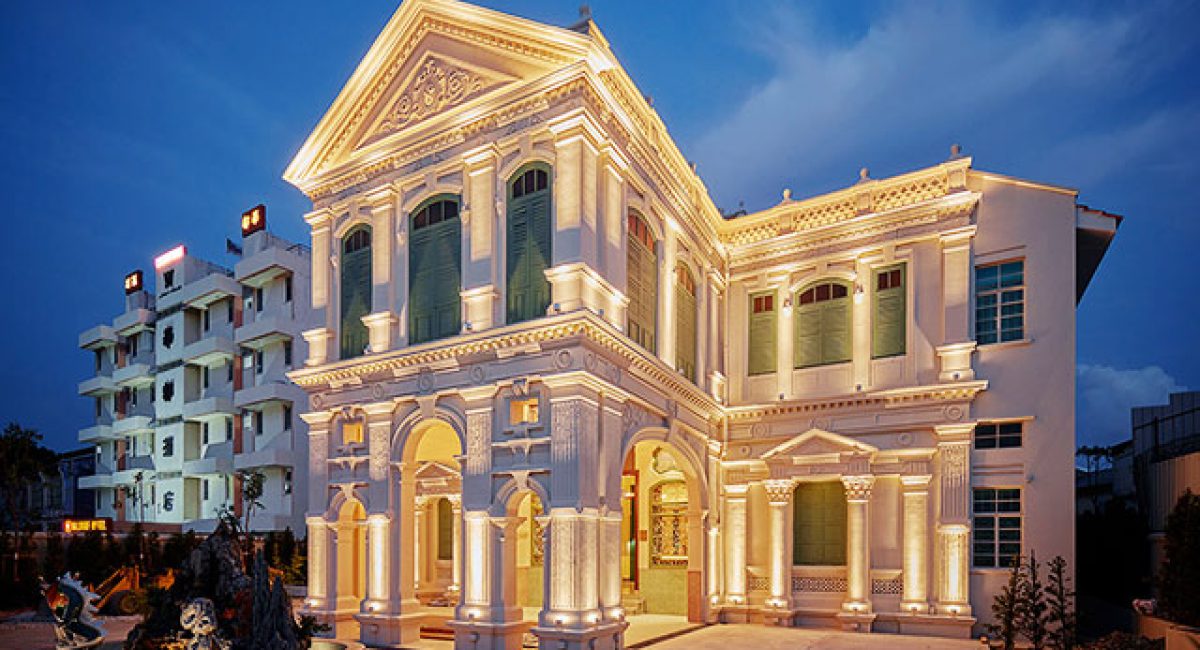 Malaysia has seen its eighth Small Luxury Hotels of the World (SLH) property open this month, this time in Penang. It’s a first for the state, which has seen its real estate prices and values in George Town soar since its 2008 Unesco heritage listing.

The company behind the 35-room The Edison George Town – ET Hospitality Ventures Sdn Bhd – is a subsidiary of ET Group, which is helmed by veteran Singaporean hotelier Eddie Tan. Mr Tan was formerly a general manager with the Mandarin group. He last held the post at Marina Mandarin (from 1997 to 2005) before he moved to Penang and based his hotel and property consultancy there, running it with his son Eugene.

The Edison George Town – housed in a former Hokkien tycoon’s mansion built in 1906 and situated in the buffer zone of George Town’s core heritage centre – will start operations in July. The building’s last use was as a dilapidated but iconic budget hotel named Cathay Hotel, which had been operating since the 1950s. This new incarnation as a top-end luxury hotel is its first major renovation and refurbishment in decades, notes Mr Eugene Tan, who is spearheading the refurbishment. The Edison George Town will have 35 rooms, with two of the biggest suites ranging from 58-61 square metres each. The hotel will also have a lounge, courtyard, library, and pool.

The Small Luxury Hotel affiliation is for better branding and marketing, adds Mr Tan. SLH has over 421,000 members worldwide and a database of over 25,000 luxury agents.

“This is truly a father-and-son project which we wanted to do together,” he says, explaining the origin of the name “Edison” (Edi-son) and the new brand of hotels they plan to set up in Malaysia and, eventually, the region.

The ET Group is described as a “developer of lifestyle properties” and has handled interior design and hotel consultancy projects in Asia, including corporate offices and private residences.

The incarnation of The Edison George Town in this grand early 20th century mansion was the biggest challenge as it required a massive restoration. The building was restored by the landlord, Lim Lean Teng Foundation, and outfitted by ET Hospitality Ventures Sdn Bhd, which has a long-term lease. This is not an unusual practice in George Town, where landowners like clanhouses and foundations have insisted on heritage conservation and found rentees who were willing to comply with both the government and the landlords’ requirements. While both the landlord and company declined to disclose restoration and refurbishment costs, it’s easily a multi-million-ringgit project. The process involved getting approval from the heritage authorities of the local council, says Mr Tan. He adds that structures that had been added to the hotel over the years were taken down, and it’s also been properly renovated to operate as a modern hotel. The interior design is done by Malaysian hospitality design specialist Blu Water Studio, whose projects include Aloft KL Sentral and Hilton Petaling Jaya.

SLH’s vice-president for Asia-Pacific, Mark Wong, welcomed the new hotel into its fold, highlighting how all its hotels are filled with distinctive character. “We want our guests to know where they are in the world when they step through the main door,” he says, adding that the SLH feature is that its hotels are consistently different and offer the highest standards of luxury.

The hotel brand affiliation company was founded in 1991 and has over 520 hotels in more than 80 countries. Asia-Pacific currently contributes 11 per cent of SLH’s total revenue with 120 hotels in this region, most of them in Thailand, China and Japan. In the last 12 months, it added its first hotels in Tokyo, Seychelles, South Korea, and now Penang. The 110-year-old Anglo-Chinese mansion, once called Venus, was built by Yeoh Wee Gark, a Hokkien tycoon, a community leader and a contemporary of Cheong Fatt Tze, a Hakka tycoon, who built the famous Blue Mansion across the road on Leith Street. Yeoh was part of a syndicate of Hokkien tycoons who controlled opium importation into the Straits Settlements through the Penang Opium & Spirit Farm. The mansion was sold to the Lim Lean Teng Foundation after World War II.

Among its other notable uses was as a film set for the 2002 Hong Kong movie The Touch starring Michelle Yeoh , and in the 1995 movie Beyond Rangoon starring Patricia Arquette and Frances MacDormand.

The mansion is a classic example of Straits Eclectic style featuring an Anglo-Indian bungalow structure with European architectural features and fittings like Scottish metalwork. It was a time when Western-educated Chinese tycoons flaunted their wealth in ostentatious homes.

Meanwhile, there will be those who mourn the passing of the former Cathay Hotel. Its last Tripadvisor review was in 2015. While some decried its thin sheets and saggy mattresses, the hotel garnered a loyal following because of its grandeur.

“This hotel has a charm all of its own,” said a Tripadvisor reviewer in 2011. A Norwegian guest who stayed there for three consecutive visits said “you can still feel the grandeur” that this place once had. A 2008 review in The New York Times rated it six stars for its character, with the reviewer describing it as a “magnificent pile” and the stay there “literally in the heartbeat of Penang’s Chinatown” – with “pedicab drivers snoozing at the doorstep”, temple incense drifting through the open windows and “fishy-sweet smells of Hokkien mee and char kway teow from the hawker stall across the street”.